Back to home page

Cynthia Fortitude and Gertrude Rallentando
in

The Legend Returns
With Helen Moulder and Rose Beauchamp 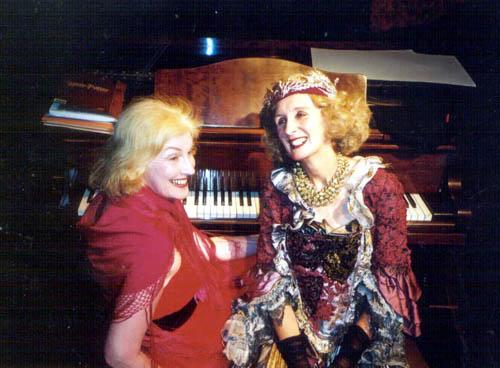 Synopsis
This double-act, written by Helen Moulder in collaboration with Rose Beauchamp and Michael Wilson, who also directed the piece, defies description. The celebrated opera singer and musical snob, Cynthia Fortitude, with her expressively silent and long suffering companion/accompanist, Gertrude Rallentando, devote their lives, so Cynthia says, to "taking our concerts of serious music to all corners of the globe …. mainly third world countries." After tumbling their way through snippets of arias, anthems to virgins and other vocal meanderings, they premiere their triumphant first and unfinished opera - "Stan" - with all its gods, goddesses, atomic particles, cloned sheep and Pinus Radiata forests. This is Monty Python, Edna Everidge, Hinge & Bracket and Victor Borge - all rolled into one.

History
The Legend Returns was written by Helen Moulder in collaboration with Rose Beauchamp and Michael Wilson. The show arose from the characters Helen and Rose developed over many years in the women’s comedy troupe Hens’ Teeth and was premiered at Circa Theatre, Wellington, in the 1998 Fringe Festival. Since the premiere, The Legend Returns has toured New Zealand with Arts on Tour, played at numerous festivals and theatres around NZ, has had return seasons at Circa, has been broadcast many times on Radio NZ, and has had a season at Josie's Cabaret in San Francisco. The Radio NZ recording can be obtained from ReplayRadio@radionz.co.nz

Biographies
Helen Moulder has been working as an actor and singer for 29 years in NZ, the UK, Australia, Japan and the USA. She trained at the National Theatre Opera School and the Melba Conservatorium in Melbourne and spent one year touring with the D'Oyly Carte Opera Company in the UK and in various musicals and pantomime. Her recent roles have included Madame Giry in Ken Hills' Phantom of the Opera, (tour of Japan) Virginia Woolf in Vita and Virginia at Circa, for she won an Accolade for Outstanding Performance in the 1999 Wellington Theatre Awards, Vivian Bearing in Wit, also at Circa, for which she won the Wellington Actress of the Year in 2000, the eccentric opera singer - Cynthia Fortitude in The Legend Returns, Miss Shepherd in Lady in the Van, Mrs Eynesford-Hill in My Fair Lady, Miss Havisham in the recently acclaimed Court production of Great Expectations, Sylvia in Meeting Karpovsky, devised with Sir Jon Trimmer and Gramma and Annie in In Flame. Helen's film and television credits include Close to Home, Pictures, Country GP, Erebus - The Aftermath, for she won a best actress nomination for her role as Maria Collins, The Wall, Abberation and The Dark Knight.

Rose Beauchamp is a performer based in Wellington. She initially worked with Red Mole, and trained at Drama Action Centre, Sydney and with Musubi Za Puppet Company in Japan. She has worked in puppet theatre for 30 years. And participated in the creation of many shows including Eyeball, Eyeball (QE II Park Outdoor Event), In Defence of Judy (Sonic Circus) and Stone Telling (Taki Rua). She has toured her solo shadow play The Blue Shoe Show - nationally and internationally to festivals in Japan, Korea, Pakistan and Hungary. In the last ten years, shifting her performance focus from puppetry to piano playing in comic roles, she developed a role as housewife/pianist in Hens' Teeth and Gertrude Rallentando as a foil to Helen's Cynthia Fortitude. She has been responsible for touring the puppetry talents of Nori Sawa's Macbeth from Prague and Rafael Teixido's More than Cardboard from Argentina.

"A comic delight... they reduced me to tears of laughter"
- Laurie Atkinson, Evening Post