Back to home page | Back to Reviews

A MOST ENRICHING MEETING

At the curtain call of the opening night of Meeting Karpovsky the two performers, Helen Moulder and Sir Jon Trimmer, took their bows to loud applause and many of the audience stood and cheered as if they were in a much larger theatre where ballet is usually performed. Only the large bouquets of roses were missing.

Yet we had neither witnessed any ballet nor been swept away by any grand theatrical spectacle. We had, however, been held, moved and enriched by this beautifully crafted piece of chamber theatre.

At the beginning of Meeting Karpovsky one could well believe that Sylvia, a middle-aged woman who is standing amidst boxes of her daughter's unwanted posessions and chattering away to herself and to her gallery of photos of the famous ballet dancer Alexander Karpovsky and making up silly poems of rhyming couplets, is going to be another comic portrait of an eccentric woman that Helen Moulder creates so well in her comedy sketches.

But Sylvia is, we soon learn, hiding in her crumbling, wisteria covered house from a tragedy she cannot comes to terms with. She retreats into her fantasy world centred around her hero Alexander Karpovsky whom she saw dance 127 times in Europe and whose large blown-up photos of his most famous roles in Giselle, The Nutcracker, La Fille Mal Gardee and most significantly Petrouchka hang on her walls.

Then suddenly her angel, divine athlete Karpovsky, mysteriously appears. Again the comedy of Sylvia attempting despite her weak ankle and frozen shoulder, the pas de deux from Giselle with her silent hero teaching her the steps leads us into a greater understanding of her attempts to cope with her emotional distress. The silent puppeteer gives the puppet a heart and a reason for living.

It would be unfair to explain the source of Sylvia's despair but the play's arc leads her to a stoical acceptance of loss and an affirmation of the joys of living which is expressed in a simple but heart-piercing epilogue, which is then underscored by a finale of a funny, sprightly pas de deux, that is, as all dance is, a dance of life. 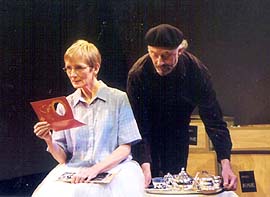 Jon Trimmer, mute except for one word, mixes persuasively fantasy and humanity in his role as Karpovsky and gives perfect support. The long, silent scene when he serves Sylvia her tea is as tense and emotionally revealing as those in which words are used.

Helen Moulder gives a marvellous performance. Her extensive emotional range and her comedic skills are always subtlely understated, and she keeps one totally absorbed and deeply moved in Sylvia's plight. At the heart of the play is the necessity of accepting the harshness of life; at the heart of her performance is the emotional power to lead the audience to be uplifted by this acceptance.